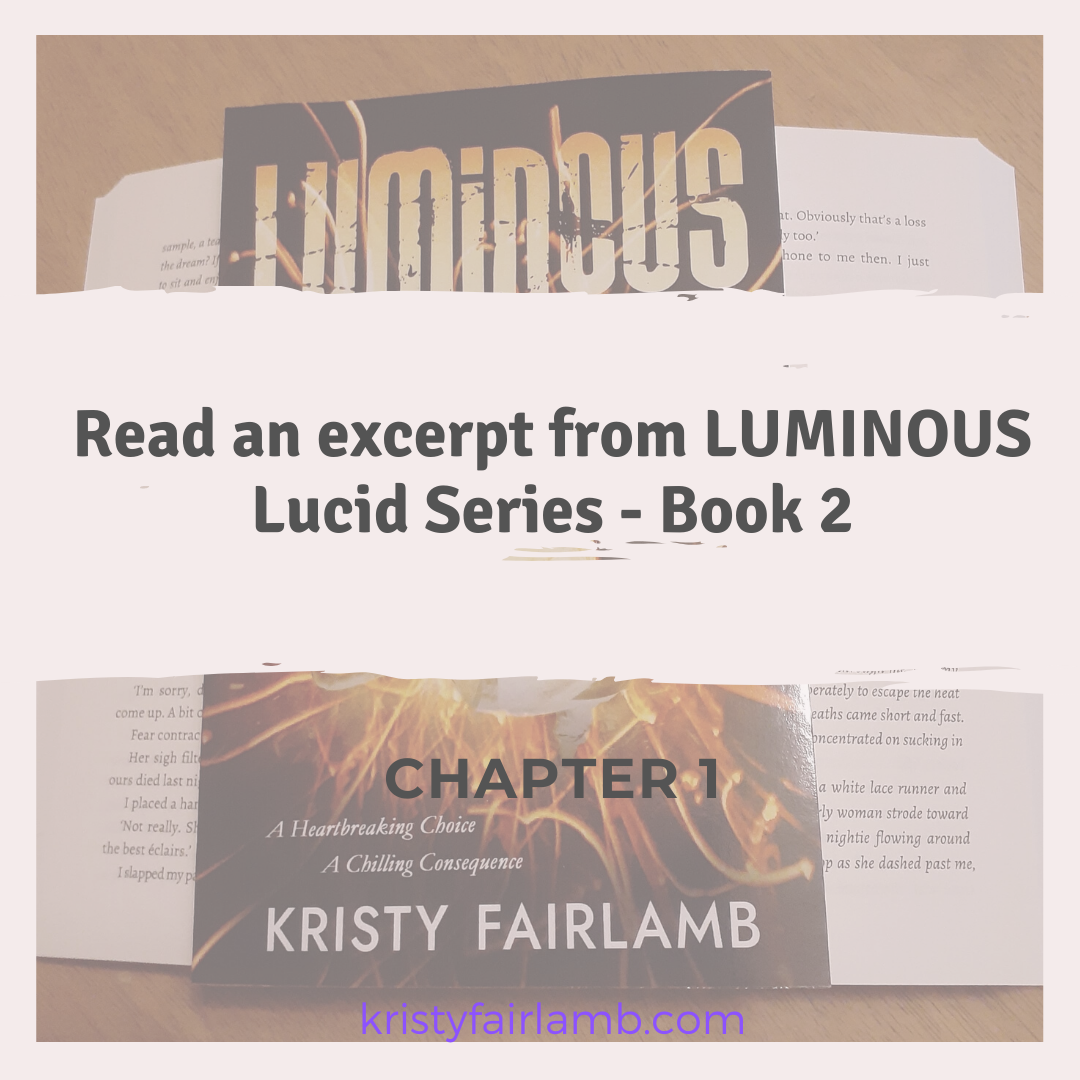 DO NOT keep reading unless you’ve read book 1 – LUCID

MY DREAMS BROUGHT ME love, and then they stole that love away. Yet the hope of seeing him once more surfaced in all its heartbreaking vibrancy.

I drew in a sharp breath; every one of my six hundred and fifty muscles tensing in unison. He was so beautiful. He always had been, not that I ever expected that to change. In all the days, weeks, and months since I’d lost Tyler, I never truly imagined what it might be like to see him again. But there I stood, diagonally across the road, a mere twenty metres from the boy who meant the world to me yet didn’t know I existed.

A confusion of emotions – ecstasy, satisfaction, sorrow ­– raced through my veins at the sight of him. His hair flicked down his forehead, shadowing eyes I knew were as dark as night. A lump formed in my throat; an accumulation of all the things I wanted to say but couldn’t, and all the things we’d been but in truth hadn’t. Not since the moment I’d been ripped from his arms.

He walked on the footpath beside his friends – friends he hadn’t lost to the awkwardness that followed death like a bad scent. His laughter filled the air, the kind of easy laughter you find so effortlessly when you don’t have a care in the world. His stride was light, his load unburdened from loss and responsibility.

School was out for the day, and as the group paused and kids continued to drift around them, his gaze lifted to mine.

I resisted the urge to smile and wave, to acknowledge how familiar he was to me. So familiar that I knew if I stood in front of him, I’d see the small dimple on his chin and above that the most perfect lips – lips that no longer knew mine. Mine hadn’t forgotten his though, they never would.

His eyes bored into mine, reminding me of the first time I’d seen him in the dream at the airport. I’d like to assume the curiosity in his eyes was recognition, but I think it was just a reflection of the glimmer of hope in mine. Something I’d held so tightly to for so long; it was the life raft that had kept me afloat in my sea of pain, too afraid to let go, because if I did I’d sink slowly and heavily to the bottom of the ocean.

The front yard of school sat still and empty. A blue hatchback cruised along the road beyond the school’s low iron fence. A growing hum of teenagers in the rooms behind me indicated class was almost over. I sat alone at the table, normally occupied by my four friends, but for a few more minutes would be mine, alone.

I slid the crumpled paper from my uniform pocket and unfolded the page to read the words for the thousandth time. The corner fluttered in the gentle breeze, I held my palm flat across the sheet, holding it in place.

Even in my dreams I never imagined that I should find so much love on earth. How that moment shines for me still when I was close to you, with your hand in mine! Those days flew by so quickly, but our separation will fly equally so.

The scrawl underlining the last line had smudged a little since I drew it two days ago, but the meaning remained clear. As vivid as some of Tyler’s final words to me. ‘You’re going to be great.’ Words that carried me through the constant doubt of whether I’d done the right thing.

How do you know if you’ve made the right choice? I’d battled with the question for two long days. I lost the one person who meant the world to me when I’d brought back to life all those people who didn’t. My head knew it was right, but my heart screamed wrong.

I’d never known pain so agonising. How could something unseen feel so physical? I reeled from a beating as if I’d been kicked repeatedly in the guts with a metal-toed boot and stabbed in the heart by a serrated knife; the only thing missing was the blood. He’d been gone for two days and I still couldn’t fill my lungs, not with the permanent vice tightened around my chest, making it near impossible to get enough air in.

I grabbed my sketchbook from my bag, immediately desperate to see him. I wouldn’t normally bring it to school, but today I couldn’t bear to leave it at home. I flipped to the page where the lines of Tyler’s face peered up at me, and I wished with more than the stars that I hadn’t had to make that decision. I closed my eyes, hesitated, and turned the page reminding me why I had.

Satisfaction seeped through me as I peered at the old lady who’d sat beside me and the man from across the aisle. She’d made it safely home to the people who needed her, and the man, with his weird grin, went on to fulfil the plans he’d been so eager to the last time I saw him. He still gave me the creeps, but even he deserved life. Like each of the three hundred and twenty-seven souls on board, including Tyler’s dad.

Tyler might not be here, and I might be missing what felt like half a lung, but I knew what I needed to keep doing. What I was always meant to do. Help others. Bring people back from an early grave when they still had life to live.

I’d had my mope, now I needed to get back to business, to fly.

‘Hey, you’re better,’ Max called as she limped across the grass and plonked herself onto the bench.

I slammed the book shut, sliding the letter between the pages. ‘Not really.’

‘Why you here then?’

Because I can’t sleep anymore. I’ve tried to find him in my dreams, but he’s not there, he’s not anywhere, and I’m all alone. Resisting the urge to scream, I shrugged, lowered my gaze, and dropped the book into my bag.

I nodded to her foot. ‘You hurt yourself again? What was it this time, landing or run up?’

Max frowned. ‘Landing. You were there, remember.’ She hesitated, peering at me closely. ‘Has your cold affected your memory?’

Blood rushed to my head, the panic at the reminder of all my lost memories inflicting a sudden surge of fear. When did this happen? I hadn’t seen much of Max lately, certainly not been to any of her gymnastics comps. I’d been spending all my time with Tyler.

Or at least that’s what I remember doing. Without him ever moving to Antil, the reality had clearly been a little different and left me completely in the dark.

‘When are you not vague?’ Max huffed and patted the back of my hand.

Three more bodies landed at the table with us.

‘Here she is. Sleeping beauty,’ Sean said, before peering closer at my face, namely the dark shade of misery under my eyes. ‘You look like crap.’ Max whacked him on the arm, and I raised my middle finger with anything but a genuine rise of my lips.

‘Everything all right?’ Amber placed her hand on the table between us.

‘Perfectly fine. Just a cold.’ Oh, and my boyfriend, who we all loved, but you don’t know anymore, now has no memory of his life with us, and I feel like I’m living on the moon.

Amber gathered her wayward golden hair into a messy bun. ‘Will you still be good to work on Sunday?’

‘Sunday?’ I hardly ever worked on Sundays.

‘Right, no, yeah. I’ll be fine by then.’ What choice did I have? If I didn’t swim, I’d sink. I’d have to summon up a few smiles between now and then though, because if there was one thing Laurie liked more than anything else when we served her canapes, it was lashings of smiles.

Cal rested his forearm on the table. ‘Dad said the bits he’s waiting on will definitely be here next week, so make sure you’re free the weekend of the eighteenth.’

‘Already done.’ Amber bit into her biscuit. ‘Luce, have you asked Mum?’

I darted my eyes to her, grappling for understanding, as if her eyes would explain the significance of why we needed to keep that weekend free.

My hesitation prompted her to throw me an anchor. ‘For the weekend off work so we can go to the lake house.’

In the middle of winter, and miss time on the snow – it was unheard of. I had no idea why, but I had to give an answer.

‘I’m not sure. I think so, but I’ll double check on Sunday.’ ’Cause apparently I was working.

‘Sorry I said you looked like crap.’ Sean spoke softly, and I stared at the genuine apology in his eyes. Sean always did do a good puppy dog impersonation. His light brown skin and dark hair and eyes all added to the effect. ‘I just didn’t expect you to still look so sick.’ Digging a nice hole, too. ‘I mean, you weren’t answering my texts, and your mum said you were pretty much sleeping twenty-four seven…I figured you were getting good rest.’

‘I was, but I need more than rest to cure me from this illness.’

‘Are you sure it’s an illness and not a cover up?’ he asked, lifting the side of his lip.

‘What? No, of course not.’ My sluggish heart accelerated faster than it had for days. What did he know? How could he know anything?

‘Really? I thought ’cause of the last time we talked and since you hadn’t answered me yet, well…’ Huh? I scrunched my brow as he hesitated with his next words. ‘I just wondered if this was about me.’

Him? How could anything be about him? Confusion blurred my vision; this was exactly what I’d been expecting. Black voids of unknown. I clenched my hands into fists, directing the fury for my turbulent life at him. ‘Sean, this has nothing to do with you,’ I seethed. ‘Nothing.’ Shifting in my seat, I tried to make my way back into the group conversation instead of the cornered one with Sean, where I had no clue what he was talking about.

‘Have you thought about it…at all?’ he asked tentatively.

Crap. ‘And…I need a bit more time.’ To figure out what the hell you’re talking about. I offered him a half-hearted, pathetic excuse for a smile, which must have appeased him because he nodded and moved his attention back to the group.

I wanted to lower my head onto the table, or better yet, run away to Greece. If this was any indication of what I’d missed and what it would take to work out the last four months’ worth of new memories, I had my work cut out. Because in order to move forward without tripping, I needed a clear path ahead, and right now I couldn’t see for shit.

What readers are saying:

“It didn’t disappoint. Suspense, romance, thrills and tears – Luminous has it all.”

“Luminous was immersive, moving and exciting, with some unexpected scary stuff thrown in!”

“I loved this roller coaster of a story. I think I loved it even more than the original.”

LUMINOUS will be out on May 25th. You’ll find it in local bookstores, online retailers, and signed paperbacks will also be available via this website. Details coming soon.