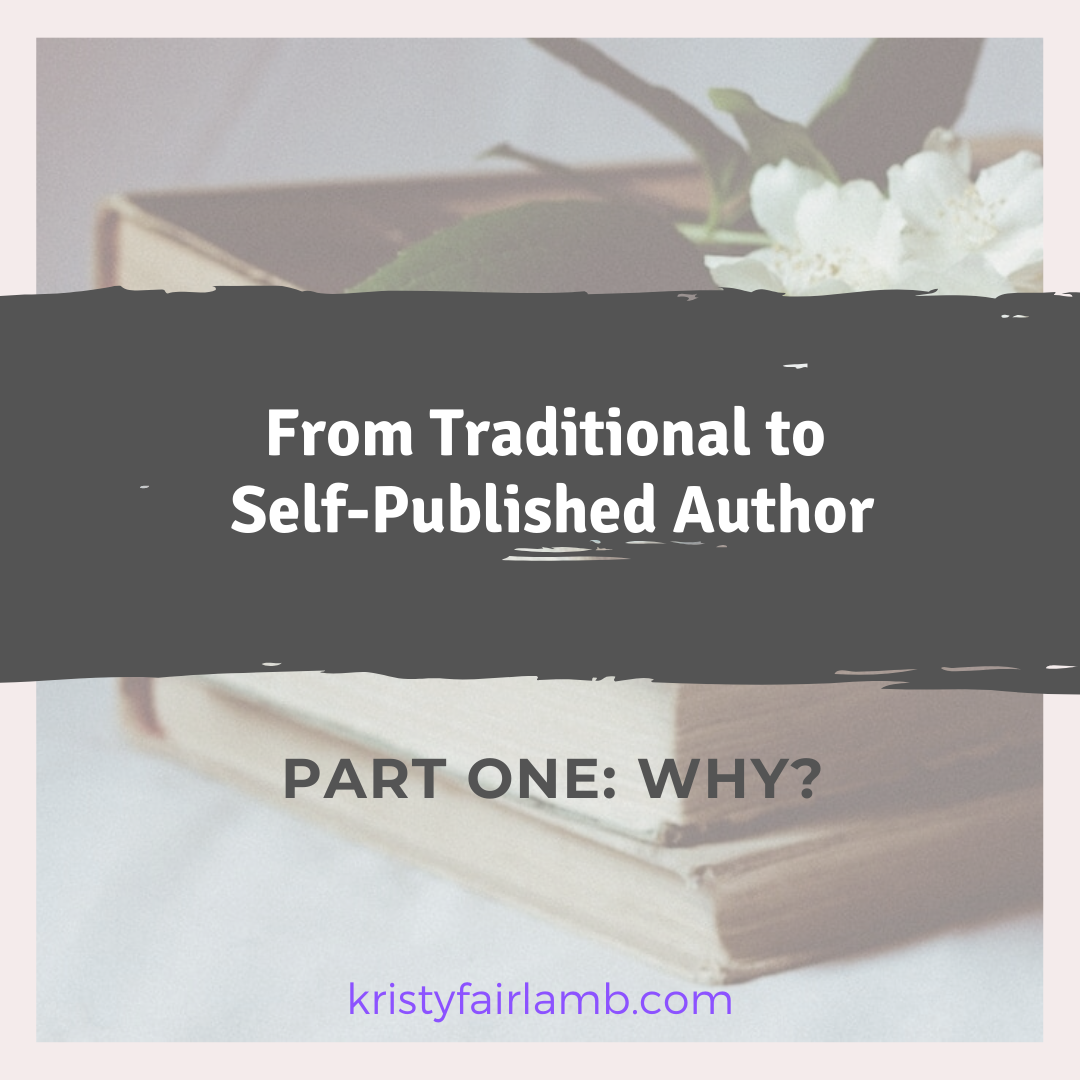 From Traditional to Self-Published Author – Part One: Why?

Before I explain why, I need to rewind and tell you some of the story behind where I’m at now.

Back in 2017, after I’d written a couple of books, I decided to try and get them published. After months of trying, and lots of research, I made the decision to self-publish my books. All I ever wanted was for people to read and enjoy my stories, and here was a way to do that.

I needed them to be as professional as any published book on the market and sought out an editor, getting samples as well as quotes and eventually finding the one that suited me and my stories. I booked her in. She liked my story so much, that in April 2018 I signed a 2-book contract with her small publishing house. A dream come true, an unexpected one, but pretty wonderful all the same.

In April 2019 my debut novel, LUCID, was released. The launch went well, sales were reasonable for a small press and I was getting really great reviews. But with the sequel due to come out the following year, there was barely time to revel in the joy of the dream, certainly no time to rest.

In October 2019, about four days after sending in my completed copy edits for book two, I received a letter from my publisher letting me know they were closing down. Whoomph. Talk about a kick in the guts. This was every writer’s worst nightmare. They were my way into the publishing world, and it felt like they were kicking me back onto the street. Except they weren’t, because the doors would stay open a little longer until they formally ceased trading, not for almost two years. I could still publish my sequel with them if I chose. I could also take back my rights if I chose.

I spent a week in turmoil. The sadness for what all the authors and I were going through, plus a publisher who’d lost something they were so passionate about, was heartbreaking. Eventually I came to the decision that I would stay with them. They’d done a great job on my first book, they would do a great job on the sequel. I’d had my moment of sad, but now it was business as usual – let’s do this.

‘What is it, dear? Something’s bothering you.’ Understatement of the century. She frowned,
pressed her lips together, and waited.
I folded my hands in my lap. ‘What would you say if I told you I dreamed of someone before I met them in real life?’ I gulped. Always the moment of truth when I laid myself bare.
Granny Tess smiled, the edges of her eyes laced with years and years of wrinkles, or as she
would call them, laugh lines. She caught hold of my fingers and squeezed. ‘I would say tell me more.’
I sucked in a lungful of air and released the avalanche of tension I’d been holding onto for the last two days. I told her about the plane crash, about Tyler, and not being entirely sure if he recognised me or not, even though saying it out loud sounded like the most absurd idea in the history of forever. I exhaled. My heart had climbed a mountain, but now that the words were out, the throbbing lessened
to a steady beat.”
– LUCID –

Nearly three months later and things didn’t feel like they were business as usual. If you’ve ever been a published author, you’ll know that it sometimes feels like you have no clue what’s going on, what you’re supposed to do next or where things are at. I have some great author friends who I meet up with regularly to chat authorly things with and although we are with different publishers it’s often the same story. I didn’t know I was supposed to do that, or, I just had to drop everything because I needed to do X. It’s not because our publishers have done anything wrong, it’s just the way it works. They do the behind the scenes stuff, we have no idea what that is because at the time it’s all new to us, and suddenly they expect or need something and it’s up to us to deliver so they can continue to do their job.

Onto my second book and I knew what to expect this time. I had a release date looming closer and I knew we weren’t on schedule. Everything in the publishing world takes time. I’m not an impatient person, in fact, I’d much rather things go slowly and be done well, than doing a rushed job that leaves things undone. As the release of my sequel, LUMINOUS, grew nearer, I worried we might end up rushing things. We needed time to build up excitement, we didn’t have a cover (that was my fault, I was being fussy and difficult), we weren’t yet at the final pass and ready for formatting, ARCs weren’t even close to being sent out. All things that had been done by this point with book one.

It’s hard to know if all of this would still have happened had nothing changed with the publishers, because that’s life and business right, sometimes things just don’t go as we plan. But I’ve been in business before. I’ve had to make that final decision to close and I know how it feels. It’s hard to do business as usual, when business isn’t as usual. I was beginning to wonder if it might be for the best interests of me and my book if I go it alone for the release of my sequel.

I wanted to release my book with excitement, with full confidence that it was going out into the world with a bang loud enough to be heard amongst the thousands of other books being released. I couldn’t do that while feeling out of control and a bit lost about where things were.

I mulled over my decision for well over a week, again fighting with those same agonising questions, doubts and worries. But when my heart settles and I feel calm, that’s when I know I’ve made the right decision. I wouldn’t wait until the publisher closed their doors, I would take back my rights to both my books now, and take back full control over their future.

Writing that email to my publisher wasn’t easy. It was saying, thanks for everything you’ve given me, and then proceeding to slam the door in THEIR faces. I have learnt so much about stories, words, and publishing through my relationship with them. I don’t regret a single thing. And that’s what made it so hard. It felt like a break-up. My heart hurt. I may have cried (okay, I DID cry). The night I sent my email, knowing there was no going back, and again the following morning, after I read the words from my publisher, sharing their sadness, but fully supporting my decision, and telling me they also regret nothing.

My heart has been heavy this week and a couple nights ago, I had to formally confirm my request to cancel my contract with my publisher. After years of wanting a contract with a publisher, it felt wrong to tear it apart and say, I don’t need this anymore. And I guess, because of the avenues open to anyone to self-publish, I didn’t. But that didn’t mean I wasn’t grateful for the learning I’d had with them, or that I didn’t think having them for book one wasn’t worth it. I’m in a great position because of my experience with them. I’ve done it once, I’ve seen what it’s like one way and now I’m going to give it a shot another way.

And that’s what this series of blogs will be all about. To share the journey from traditional to self-published author. To share the differences, the challenges, the aha moments, and all the learning I am bound to encounter along the way.

So, please, I hope you’ll bear with me as I take you along for the ride while figuring things out along the way. In the end it’s all about having a sequel I can be just as proud to share with my readers as my first book.

‘Impossible!’ Jake yelled.
‘Raise the starting flag, Pops,’ Richie called from his driver’s seat – he always called him Pops.
‘Nothing’s impossible,’ Pop whispered in my ear and stood to raise his arm. Max’s hands dug into my sides, and I fixed my eyes on the
bottom of the hill.
‘Ready. Set.’ Pop lowered his arm. ‘Fly!’
– LUCID –